Contrary to popular belief, many Confederate veterans did receive pensions.  They were provided not by the U.S. Federal government but by the individual southern states.  Although Confederate pension files typically contain fewer documents than Union ones, they are nonetheless very useful for family researchers.

Caution: One or more Union regiments was formed in each southern state.

So, for instance, the fact that your ancestor lived in South Carolina and fought in the Civil War doesn’t mean that he was necessarily a Confederate soldier.

And some Confederate soldiers later enlisted in the Union army and received Federal pensions.

At the start of the war eleven southern states seceded from the Union.  After the war those former Confederate states of Alabama, Arkansas, Florida, Georgia, Louisiana, Mississippi, North Carolina, South Carolina, Tennessee, Texas, and Virginia all offered pensions to the Confederate veterans living within their borders.  However, most didn’t offer them until at least the late 1880s (more than 20 years after the war) and each state had its own laws governing eligibility. Most offered pensions only to its veterans who had lost a limb or an eye or who were permanently disabled or indigent.

In states where pensions were offered to the widows of Confederate veterans, they were qualified only to the extent that the veteran himself had been qualified for one before his death.

This had the effect of discouraging some Confederate veterans from moving their families north or into the western territories because, unlike their Union counterparts, doing so would cause them to lose their pension eligibility.  (Confederate veterans were also ineligible for Federal land grants like under the Homestead Act of 1862). Even a veteran’s decision to migrate between southern states may have been affected by the differences in the pension laws and the prospect of going through the application process again.

On the other hand, a veteran who had moved out of state after the war might have been tempted to return once their state started offering pensions although, in many cases, the state would specify a minimum length of residence before he would qualify.

The border states of Kentucky and Missouri were claimed by the Confederacy as their own but those states did not secede and were considered Union states by the Federal government.  Nonetheless, in the early 1900s, their state governments did offer pensions to the surviving Confederate veterans living in those states. 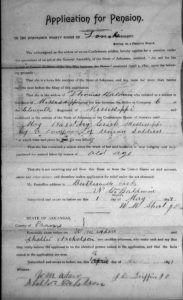 The border state of Maryland was not claimed by the Confederacy, but many Confederate regiments (as well as Union regiments) were formed within its borders.  The state never offered pensions to its Confederate veterans, however.

Oklahoma wasn’t admitted to the Union until 1907.  A few years later, however, it did start offering pensions to Confederate veterans living within that state.

Where to find the records:

Each of the southern states is itemized in this blog post, along with the dates on which they began offering pensions and the links to their online records and offline repositories.

Several dozen units were raised directly by the Confederate government and unrelated to any specific state.  They included infantry, cavalry, artillery, engineers, signal corps, scouts, and guards, among others.  Several regiments of native Americans were recruited from Indian Territories. The Confederate Navy was similarly organized directly by the Confederate government.  As with all Confederate veterans, to the extent that those veterans received pensions, it was through the southern state in which they lived after the war.