The last widow of a Civil War veteran was not entitled to his pension.

During Reconstruction and thereafter, former Confederate states had even less money to devote to the pension system so they were likewise suspicious of any attempt to abuse it.  Eligibility for Confederate pensions varied by state, however.

Much has been written about the recent (16 Dec 2020) passing of Helen Viola Jackson, the last known widow of a Union Civil War veteran. At age 17 she had married James Bolin, age 93, a veteran of the 14th Missouri Cavalry. Some have described it as one of those “marriages of convenience” in which she would care for the old veteran in his final days in exchange for the financial security of his pension upon his death.

But not only did the widow not apply for his pension – she was not entitled to it and, with some notable exceptions, the supposed “common practice” was largely a myth.

The U.S. government always intended to provide ongoing support for Union veterans and, upon their death, their widows (and other dependents) who were left in financial hardship. But the government was also well aware of the risk that the pension system could be abused.

Starting in 1862, the U.S. Government authorized the widow of a federal soldier to claim his pension if he had died in the line of duty – but only during her “widowhood”, i.e., until/unless she remarried. 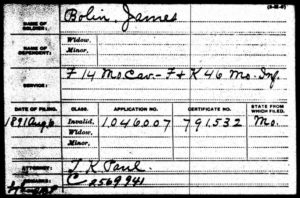 In 1890, the qualifications were expanded to any disabled veteran (even if his disability was not related to his service) and, upon his death, to a widow who had been left with “no other means of support.” So a widow’s application was subject to a means test. She would be disqualified, for instance, if she had substantial cash savings, real estate that she could sell, etc. Most notably, a widow was only qualified if she had married the veteran prior to the passage of that law (27 Jun 1890).

In 1901, the eligibility was loosened to allow a pension to a widow of a Union veteran if they were married prior to 27 Jun 1890 and even if, upon his death, she had remarried – provided that the subsequent marriage had ended (by death or divorce) through no fault of her own, leaving her with no means of support. Again, the intent was to support indigent widows from longstanding marriages to Union veterans.

In 1920, the cutoff date for the marriage was moved to 27 Jun 1905. That is, they were required to be married for at least 15 years prior to the veteran’s death in order for his widow to claim his pension.

So by the time the veteran James Brolin married Helen Viola Jackson in 1936, it was well-established by law that she would not be eligible for his pension because they had married after 1905.  Even if they hoped that the law might be revised again, they had every reason to expect that the law would still require them to be married for at least 15 years – so she would not be eligible for his pension unless he survived and they remained married until at least 1951. He died in 1939.