Cases Studies: Here we offer some real examples to demonstrate some of the problematic issues having to do with pension indexes and how to get around them.

Following are a series of specific cases that are chosen to demonstrate some of the more unusual or enlightening characteristics of pension indexes.  Many of these examples underline the differences between indexes and the need to consult every index that is available to you in order to avoid missing valuable information.  (Click on an image to see it in a larger size).

If you have encountered an unusual case which highlights a different or noteworthy issue in relation to pension indexes, then we invite you to describe it in the Comments section at the bottom of the page so that we might append it to this list of case studies.
case1

There are two cards in the General Index, one for this veteran and one for his widow.  Whichever card might be found first might lead the researcher to conclude that there is no pension for the other party. Both pensions are listed together on the Organizational Index, however. 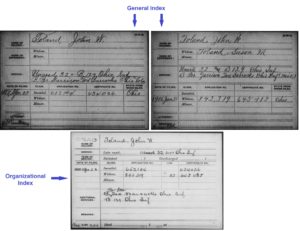 The Organizational Index lists a pension for the minor child only but the General Index card for the same veteran indicates that the widow also received a pension and identifies her by name. 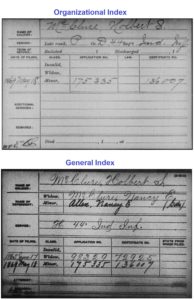 Here is an example of a “Contest[ed] Widow”.  Both applicants are identified by name on the General Index.  The first applicant (Susan) was denied the pension while the second (Margaret B.) received it.

There are two cards in the General Index for the widow of James Webster: one widow named Liza and one named Martha.  Neither card suggests the existence of a second widow.  Only the Organizational Index indicates that there were two widows because they are listed on the same card. 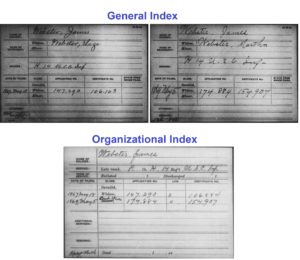 This is the pension card for John Kelly from the General Index.  Because he had an alias of Elvin D. Bradley, however, there is a second card for him In the same index.  However, only the second card references the number C2460665 which is the key to finding the physical file.  So when a card index says that the soldier had an alias, be sure to check for a card for each name. 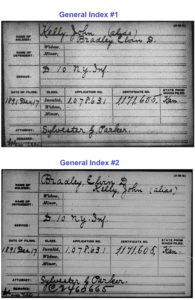 The 1890 Act to Grant Pensions allowed life-long pension benefits to be paid to “insane, idiotic, or otherwise permanently helpless” children of a veteran.  Under normal circumstances, the General Index pension card typically notes only the name of the child’s/children’s guardian or “Gdn.” (see Case Study #2 above).

In such a case, the Numerical Index explicitly identifies the class of applicant as “Helpless Child.” 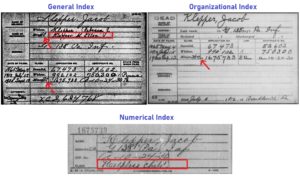 Note: A 2020 news story documented the death of Irene Triplett, the last recipient of a Civil War pension.  While it may seem remarkable that someone in 2020 could still be collecting a Civil War pension, Ms. Triplett (whose veteran father was nearly 84 at the time of her birth in 1930) qualified for life-long benefits under this “helpless child” provision of the pension law.{case7}

There are two cards in the Organizational Index for the mother of Thomas G. Mears because he served in two companies (D and K) of the 39th Ohio Infantry.  One of those cards indicates that the mother’s pension application was not approved because it lacks a Certificate Number.  The other card indicates a Certificate Number of 574521, however. So which one is correct?

The mother’s General Index card does not include a Certificate Number – suggesting again that it was not approved.  Indeed, the Numerical Index says that Dependent Certificate Number 574521 was not issued to the mother of Thomas G. Mears but rather to a dependent child (“C”) of one John Tipton of Co. D in the same regiment.

Checking John Tipton’s own pension index cards, we see that, in fact, his dependent child was issued Certificate Number 574521.

So it is clear from the weight of the evidence that the Organizational Index attributing Certificate Number 574521 to the mother of Thomas G. Mears was in error and that she did not receive a pension after all.
{case8}

This case provides an example of an army widow’s Pension Payment Card which includes a list of the couple’s surviving minor children.  As indicated on the form, the widow would receive an additional $2.00 per month for each such child. (That amount changed over time).

The “Commencement” column reflects the date of the widow’s application, i.e., the commencement of benefits with respect to each child.

The “Ending” column reflects the last day on which each child was eligible for benefits – that is, the day before his/her 16th birthday.  From this, of course, can be calculated his/her birth date.

Unfortunately, a staff member in the Pension Office frequently lined out the name and dates for each child which sometimes makes it hard to read.  That information was presumably stricken if the child died or on the occasion of his/her last day of eligibility so that no subsequent payments would be made with respect to him/her.  The fact that it is lined out does not mean that the information about that child is somehow incorrect.{case9} 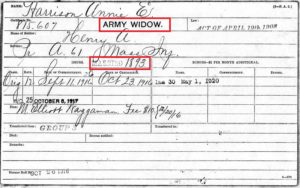 This shows the relatively rare case of a Army Widow’s Pension Payment Card on which has been documented the couple’s year of marriage. 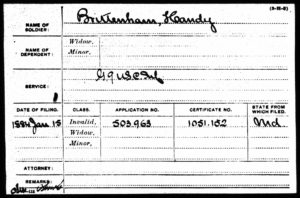 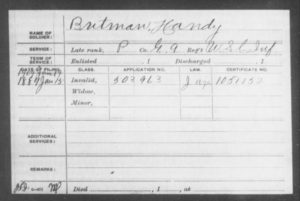 Brittenham or Britman?  It is not uncommon for the indexers on the various sites to interpret handwriting differently – so one might say Morton while the other says Martin.  But this is a case where the General Index (on Ancestry.com and FamilySearch.org) and the Organizational Index (on Fold3.com) reflect dramatically different names for the same pension.  Notice that the Application Numbers and the Certificate Numbers are the same.

This emphasizes the wisdom of checking both index systems.  Be sure to provide both names when requesting the full pension file!

If you know of an unusual case study or you have comments or questions about those represented here, please submit a Comment below.