Pension files offer a window into the life of a soldier before, during, and after the war.  In addition to some military details, they can be among the best sources of biographical, medical, and genealogical information for soldiers and their families. 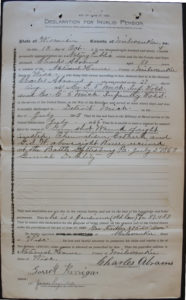 A pension file is usually triggered by the completion of an application by the soldier himself. On the application, he would detail his military service and his wound(s) or disability, if any, for which he believes he is entitled to a pension. The application will also usually include his age, residence, and a copy of his signature (or “mark”)

While this is valuable first-hand account by a soldier of his service, the most value of a pension file is in it supporting documentation.  The file may contain copies of enlistment or discharge papers, furlough records, and testimonials by his commanding officer and/or fellow soldiers, and detailed accounts of his wounds and when/where/how he received them, among other types of military records.

The Bureau of Pensions sent questionnaires to all surviving veterans in 1898 and 1915.  Pension files that were active as of those dates will often include those completed questionnaires which contain some genealogical information.

In addition, the file will frequently contain many other documents which extend far beyond his military service, including the date and place of his birth, his spouse and date/place of marriage, and a list of living children. In an effort to support the soldier’s claim for financial support, a pension file will frequently include copious information about his medical conditions (often in graphic detail), including reports of regular medical examinations – a detailed medical history that may extend for decades into the soldier’s old age. We have even encountered a pension file which contained a life-size drawing of the veteran as evidence of his amputated limbs!

Pro Tip: The qualifications for a pension (and therefore the amount and type of supporting documentation) varied over time. In order to receive a Union Civil War pension, for instance, veterans were initially required to testify to their honorable service and then to demonstrate that they were disabled by wound or disease as a direct result of that service.  As time passed, the laws the qualifications were loosened to allow any disability that prevented the veteran from making a living.  Eventually, Union veterans (or their widows) qualified for a pension based merely on their advanced age.

If, upon the soldier’s death, his widow or other dependent applied for a pension with reference to his service, then the file is likely to contain a great deal of genealogical info because that applicant had to prove not only that the soldier served and had died but also how he/she (the dependent) was related to the soldier and was reliant on his income.

In such cases, a pension file may contain a bonanza of genealogical information, including details about the soldier’s birth, marriage, death, or burial, the maiden name of his spouse and the name and birth dates of any minor children. In fact, it common for a pension file to contain original documents like marriage, death, or burial certificates, as well as eyewitness testimonials on those subjects by family and friends.  A pension file may even contain original war-time letters by the soldier or other evidence that was intended to prove his service and financial support.  In very rare cases, pension files have even been known to include a photograph of the soldier.

The volume and variety of records in a pension files can be truly remarkable – making it one of the best contemporary sources for genealogical information that you will ever find.

Revolutionary War and War of 1812

In order for us to retrieve a Union pension file, it must first be located in an index.  The two main pension indexes are:

If you have a Pension Index Card, then please upload it when you place an order. If not, we will use all of our available tools in an effort to find it for you.

Confederate pension files are not at the National Archives.  They are held by the southern state in which the veteran lived after the war, not in the state for which he served.  See this post in our blog for more information.

Pension files for the Mexican-American War, Early Indian Wars, Spanish-American War, and Philippine Insurrection are available only at the National Archives.  Click on appropriate link to order those records.